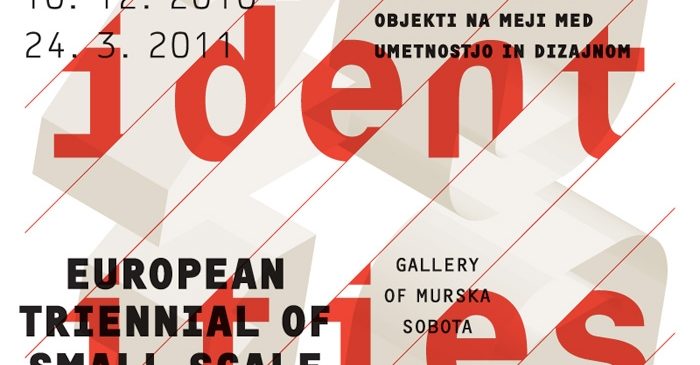 Split Identities: Objects at the Interstice of Art and Design

Since 2001, the Gallery has named an artistic director to conceive a theme for the Triennial: first “Architectural Small-scale Sculpture” (2001, curated by Christoph Brockhaus), then “Renaissance of the Statuette” (2004, curated by C. Brockhaus), and most recently “Joke, Satire, Irony and Serious Meaning” (2007, curated by Thomas Deecke). The Franco-American curator based in Germany, Katia Baudin, has been invited to curate the 17th edition of the Triennial.

For Katia Baudin, the challenges of curating this particular triennial have been multiple. Her goal has been to select a theme that relates inherently to the local context: the geographic border situation of Murska Sobota and its oscillating identity as an Hungarian, Yugoslavian and now Slovenian city; the traditional economic characteristics – from potters villages to the rise and fall of the textile industry; a local population relatively isolated from other major cities, less familiar with cutting edge developments in contemporary art.
Another aspect also needed to be defined to come up with an adequate theme: what is “small-scale sculpture”? Rare are those artists that limit themselves today to small-scale sculpture, or even to one medium – be it painting, sculpture, photography or video. In a conceptually-based art world, the artist chooses the technique and ensuing size that are best adapted to his or her artistic project, from a tiny object to a huge outdoor sculpture. However, certain types of sculptures are almost always small in size: the model or the maquette that help prefigure large scale works (sculpture or architecture), and the statuette or figurine. In both cases, these small-scale sculptures are rarely of purely autonomous nature – more often they are miniature sketches of larger, final works.
However, there is perhaps one artistic 3-dimensional sculptural form which could be considered as small-scale and autonomous in nature: the object. The unique character of the object resides in its direct and active relationship with the human body or subject. Of smaller scale, it can be held, manipulated, worn or intimately looked at.
While the object in its functional form has long inspired designers, over the past two decades, an increasing number of artists have shown an active interest in creating everyday objects while designers have developed objects that question functionality and refuse categorization. Today, it is not rare for designers to exhibit at art galleries (Matali Crasset at Gandy Gallery and Ropac, Robert Stadler at Perrotin, Marc Newson at Gagosian) or for artists to create furniture or objects for international furniture makers (Atelier van Lieshout for Moooi). Is it art or is it design? Is it a sculpture or is it a lamp?
“Split Identities: Objects at the Interstice of Art and Design” will explore these complex relationships that reflect our own lives in a world driven by the possession of objects. It will unite objects by nearly 60 artists and designers from fifteen countries throughout Europe – Austria, Belgium, Belorussia, Czech Republic, France, Germany, Great Britain, Italy, Kazajstan, Netherlands, Poland, Russia, Slovenia, Sweden, Switzerland – that examine the “dys/functional” object through different perspectives. While focusing on contemporary positions, two key “historic” references will act as leitmotifs for the development of the theme  – Marcel Duchamp’s “Boite en valise” and Kasimir Malevich’s Tea Set.
Many of the artistic positions included in the exhibition question iconic modernist mottos that ruled “good art” and “good design” for a better part of the past century – from “Form follows function” (Sullivan) to “Ornament is a crime” (Adolf Loos). Interestingly, the current crossover trend between art and design finds its roots in these very movements – from De Stijl and Bauhaus to Suprematism and Constructivism – which they question critically, albeit sharing a common interdisciplinary, art-in-everyday-life attitude placing the fine and applied arts at par. The legacy of the Readymade will also be examined in certain projects that question our consumer society and its consequences in the postmodern and post-industrial age.
The complex interplay between local and global, tradition and innovation has been a subject of increased interest not only for designers and artists, but also for industry. This Triennial will thus focus on some of the most fruitful relationships between creators and artisans or traditional industries in Europe by presenting the resulting unique objects, in particular in the domains of glass and porcelain – two traditional techniques which have a longstanding tradition in Central Europe, but whose very survival is threatened due to globalization. This triennial coincides with the 300th anniversary of European porcelain production, inciting us to place a particular emphasis on this technique – long considered Europe’s “white gold” – in experimental projects that show how traditional techniques can remain pertinent in today’s world and stimulate a new generation of artists and designers alike to create objects that oscillate between usage and sculpture.
The exhibited works will be lent from artists, designers, galleries, design companies, public and private collections throughout Europe. The Dutch-based French artist Franck Bragigand will create a new site-specific installation in collaboration with local partners.
For the first time, a designer has been invited to create a specific, user-friendly environment to “house” the objects in the exhibition, questioning the manner in which small-scale sculpture – in particular objects – can be displayed. The Paris-based Austrian designer, Robert Stadler has been invited to create a unique exhibition design that will be an integral part of the exhibition itself and a specific contribution to the theme.
An exhibition catalogue including views of the exhibition design and projects realized during the Triennial will be published (Slovenian, English).
Selected Artists and Designers*:
ARTISTS:
Pierre Ardouvin (France), Atelier van Lieshout (Netherlands), Franck Bragigand (France/Netherlands), Angela Bulloch (UK), Wim Delvoye (Belgium), Marcel Duchamp (France), Vadim Fiškin (Russia/Slovenia), Sylvie Fleury (Switzerland), Carsten Höller (Germany/Sweden), IRWIN (Slovenia), Polonca Lovšin (Slovenia), Kazimir Malewicz (Russia/Ukraine), Mathieu Mercier (France), Jonathan Monk (UK/Germany), Manfred Pernice (Germany), Goran Petercol (Croatia), Tobias Putrih (Slovenia), Tobias Rehberger (Germany), Nikolaj Suetin (Russia), Franz West (Austria),Erwin Wurm (Austria)
DESIGNERS:
Aldo Bakker (Netherlands), BLESS (France/Germany), Marek Cecula (Poland), Matali Crasset (France), 5.5 Designers (France), Florence Doléac (France), Front Design (Sweden), Jewgeni Goranko (Kazakhstan/Germany), Hella Jongerius (Netherlands), Malin Lundmark (Sweden), Vika Mitrichenka (Belarus/Netherlands), Khashayar Naimanan (UK), Milos Nemec (Czech Republic), Radi Designers (France), Frederik Roijé (Netherlands), Wieki Somers (Netherlands), Robert Stadler (Austria/France), Studio Job (Belgium), Maxim Velkovsky (Czech Republic), Marcel Wanders (Netherlands)
COLLECTIVE PROJECTS:
Glassfab series (Slovakia)
Ciav Meisenthal tree decoration (France) Katia Baudin (born 1967, Neuilly sur Seine) is an American bred, Franco-German art historian and curator, specialized in the crossover relationships between art and design, as well as interdisciplinary approaches that challenge the traditional boundaries of art. She is a graduate of Hofstra University, New York (BBA) and the Sorbonne Paris IV (MA, Art History). She previously directed the Frac Nord-Pas de Calais (contemporary art and design museum) in Dunkirk, France (1997-2004), and the Ecole supérieure des arts décoratifs (art and design academy) in Strasbourg, France (2004-7). Since 2008, she is Deputy Director of the Museum Ludwig in Cologne, Germany.

Robert Stadler (born 1966, Vienna) is one of the leading French-based designers of his generation. A graduate of Ensci (the national industrial design school in Paris), he co-founded the Radi Designers (1992), an influential design group known for their experimental projects, innovative exhibition designs and seminal objects, such as the Air France tableware line. Parallel to these activities, he has developed an autonomous body of work, as well in the field of furniture and product design, as in more experimental projects oscillating between art and design (Carpenters Workshop Gallery, London; Galerie Perrotin, Paris, etc.). He lives and works in Paris and in Rio de Janeiro.