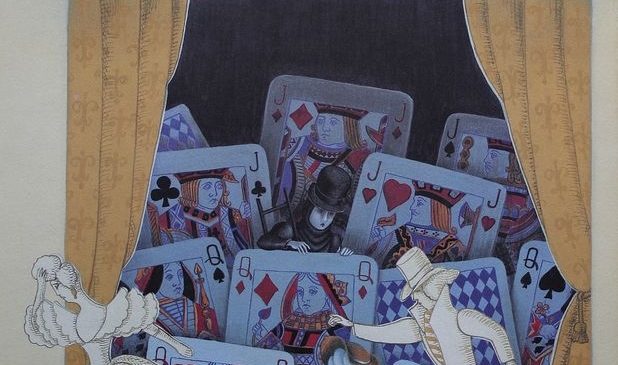 The world, that is created by Marija Lucija Stupica, is the world of tenderness, expectation, joy and also the world of pain and fear. Unobtrusive sympathy and grace, that are in her illustrations, carry inside themselves the emotional load which, with all the seriousness, avoids sentimentality of any kind. The scheme of this painted world in such that it suits optimistic fairy tales of Grimm brothers, as well as pessimistic, mythical alike fairy tales of Hans Christian Andersen. Marija Lucija Stupica mediates this silent world in a very appropriate way. She masterfully presents it as a world, that for the moment looks as it is not painted with colours on the paper, but it is put together from old and fragile spider’web that could easily collapse into dust if we touched this world or disturb its peace with talking. The fairy world of Marija Lucija Stupica, also to us who gave up what was childish, in the way of silent communication, talks similar melancholically as Shakespeare in the first act of fourth scene of the Tempest:
“Our reveals now ended. These our actors,
As I foretold you, were all spirits and
Are melted into air, into thin air;
And, like the baseless fabric of this vision,
The cloud-capp’d towers, the gorgeous palaces,
The solemn temples, the great globe itself,
Yea, all which it inherit, shall dissolve,
And, like this insubstantial pageant faded,
Leave nt a rock behind. We are such stuff
As dreams are made on, and our little life
Is rounded with sleep.” Marija Lucija Stupica was born in December 13, 1950 in Ljubljana. In 1967, she graduated from the Academy of Visual Arts and went on to continue her post-graduate work in oainting at the Academy. Already as a student, she had begun illustrating children’s books and contributing to shildren’s periodical. In 1973, she won the highest national award given to illustrators at that time, the Levstik award, for her Illustrations of Andersen’s fairy tale the Princess and the Pea.

Marija Lucija Stupica has been represented in many of the most important international surveys of illustrators and has participated in manj international exhibits of illustrations. Among others, the artist has won three Lewstik Awards, the Prešeren Prize (the national award for achievement in the area of Slovenian art), the Golden Apple BIB and the Smrekar Award given at the Slovenian Biennale for Illustrators, currently the highest national award for illustration.