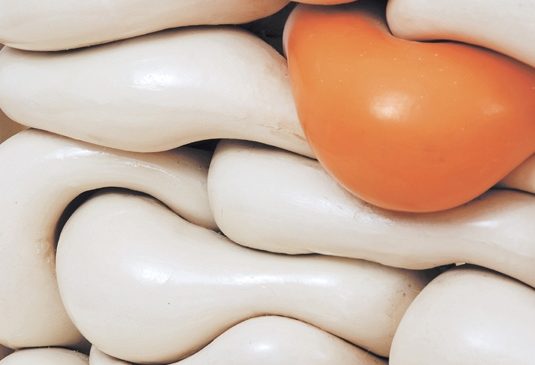 ˝Declare for the relation between the soft organic and the violent geometrical shape˝
The quote taken from a poster, which Tone Demšar created for one of his exhibitions, expresses the artist’s basic principle. It is present in his work that was still influenced by his professor at the Academy for fine arts in Ljubljana, Slavko Tihec. Moreover, it is reflected in the artist’s latest cycle from the nineties – Vdove (widows). In both phases, this ˝violent geometrical shape˝ is marked by a significant element of his opus – a frame motif, which was used in different ways and made out of various materials. The artist used this motif so often it represents not only an objective artistic but also a deeply personal symbol: Tone Demšar as a person, who was thrown into a world of frames, into the world of violent limitations.

Tone Demšar was born in 1946 in Ljubljana. He studied sculpture at the Academy for fine arts in Ljubljana (his mentors were professors Drago Tršar, Zdenko Kalin and Slavko Tihec). He graduated in 1971/72 and continued his education in sculpture, which he finished in 1975 (his mentors were professors Slavko Tihec and Drago Tršar). He was awarded the Prešeren Fund Prize for his achievement in the gallery Labirint (1980). Tone Demšar died in 1997.