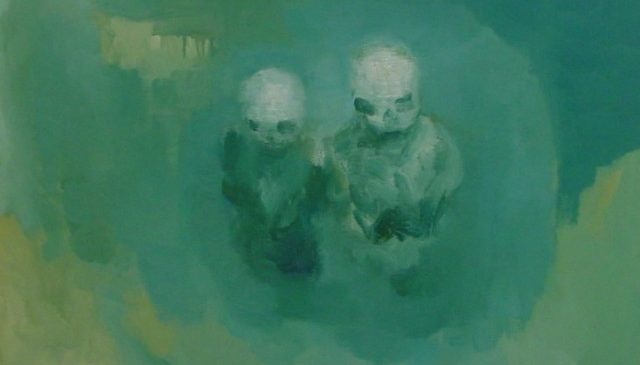 The colour fields of Huzjan’s paintings create some kind of a boundlessness. The paintings invite us to dive into them, they become our companion or we become their, this other self which longs, dares to long and to want. Huzjan’s paintings express the experience we long for. Mark Rothko said the following about his work, which he created for the dining room of the Seagram Building in New York:”If people desire holy experience, here is where they are going to find it. I am not particular.”It is that same meaning, not necessarily expressed throughout words, which is present in Huzjan’s work. Almost meditative colour fields offer the spectators numerous views since the pieces offer a new view every time we look at them. The painting is like a being with a soul, which expresses its character through various small details linked to a bigger colour surface, with a heart of its existence, silhouette of a figure, a tiny or a large being that is simply there. Zdenko Huzjan was born on 13.9.1948 in Lendava. After finishing the primary school in Lendava, Huzjan graduated at the secondary school Gimnazija Murska Sobota. He studied painting at the Academy for fine arts in Ljubljana (graduated in 1972, his mentor was professor G. Stupica) and specialized in painting (his mentor was professor J. Bernik). In 1988, the University of Ljubljana awarded him with the recognition ‘Priznanje umetniških del’ to honour his achievements in the field of art and qualified him as an university teacher at the Faculty of Education in Ljubljana (the department Fine Arts Education). His drawings, graphic work, paintings and sculptures are to be found in important collections of modern art in Slovenia and abroad. Huzjan was awarded several prizes (Nagrada Prešernovega sklada in 1988, Jakopič prize, the Župančič prize for outstanding achievements in the field of culture …). Moreover, Huzjan published three collections of poems – Mačuhice (poems, graphics; 1992), Znamenja (poems, drawings; 1993) and Živalice (poems, drawings; 1994). The publishing house Littera picta published selected poems Mačuhice in 1997 (poems, drawings), the collection of poems Solea krema (poems, drawings) in 2004 and the collection Priključki (poems, drawings) in 2006.